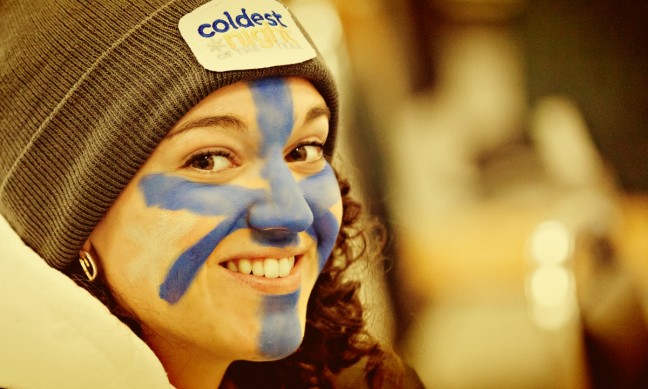 A special Coldest Night of the Year Charity Spotlight in honour of Feb 20 #cnoy16 walk across 92 Canadian communities in support of homelessness.

An incredible 92 communities across Canada will be walking on Saturday February 20. From as far north as Yellowknife, as far south as Windsor, east to St John’s and west to Campbell River. See this wonderful scoreboard and map of the walks.

“For us we’d always want the focus on our charitable partners. We celebrate our role and place in creating, maintaining and pushing the event forward but we’re wonderfully co-dependent on our charitable partners for whom all of this was developed – and the beneficiaries they serve including the hungry, homeless and yes, hurting”, says Brian Carney, CEO at Blue Sea Philanthropy.

“All of the leading indicators are there that suggest we’ll hit our goal after all the money has been counted. But, regardless, the campaign has been a success. Lots of people talking about the cause. Team captains recruitment is up 30% over last year. Walkers and fundraising up big over last year — it all points to a ton of hard, person-to-person recruitment performed by so many of the 92 charitable partners across Canada. They’ve kicked it up this year and the results are impressive.”

I will be walking as one of The Flakes team on behalf of Milton Transitional Housing on Saturday February 20th 2016. See where the walks are closest to you and sign up. I will be walking and Tweeting, which is really hard with gloves on!! Remember to use hashtag #cnoy16.

“Charities like MTH exemplify the type of charity we love working with though. Big community involvement. Fun, engaged leadership. A big vision for the future and from our stand point in CNOY, just really great people to work with on this national event.”

The most attentive may recall a previous Charity Spotlight – Blue Sea Philanthropy talking to CEO, Brain Carney. I congratulate Blue Sea Philanthropy for their vision and incredible work to create this remarkable Coldest Night of the Year walk.  Since 2011, the Coldest Night of the Year has now raised is excess of $10 million dollars supporting those at risk of homeless via local charities across Canadian communities.

“If this helps a charity thrive – even a little – then we’re happy. That’s our mission. That makes us smile”, adds Carney